St. Moritz Security Services, Inc. (SMSSI) is one of the largest security providers in the U.S. and is among the few remaining homegrown operations that is both American-owned and privately held. We have been in continuous operation since 1982.

We offer armed and unarmed security services to a variety of industries, including residential and commercial properties, healthcare/medical and educational campuses, luxury retailers, cannabis facilities, manufacturing/logistics, and more. Our specialty divisions include ATM Escorts, Mobile Patrol, and Remote Guarding, among others. 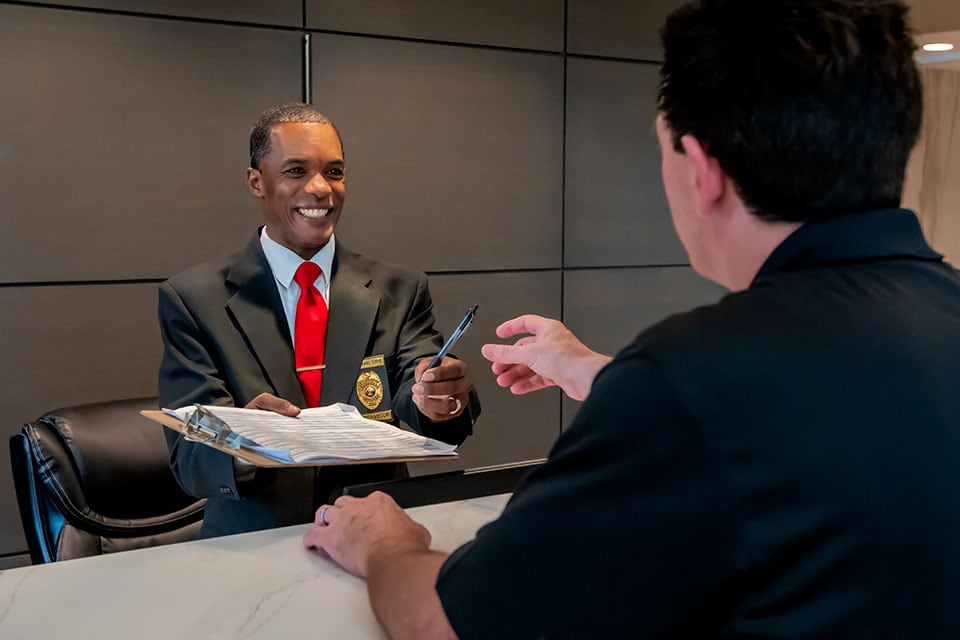 From Our Founding In 1982 To Present Day And Beyond.

Since our inception, St. Moritz Security Services, Inc. has stayed true to our homegrown values: prioritizing customers and going above and beyond with service.

Philip St. Moritz establishes Security Services, Inc. in 1982 as a value added service for his successful janitorial company located in Western Pennsylvania. Throughout the next 8+ years, he expands into small town markets throughout Pennsylvania, Ohio, Maryland, West Virginia, and Virginia.

The High Value Escort Service division is developed to meet client demand. A network of over 2000 off-duty police officers serve as escorts for high-end jewelry clients. An office in Beverly Hills, CA is opened.

Moving into the Philadelphia market, national contracts are acquired that need protection for ATM repair technicians as they work. A robust network of exclusive officers and affiliate companies is established. Utilizing the company’s internal Security Operations Center (SOC), a national network of affiliate security companies is established. A security company based in Hollywood is acquired, allowing the company to enter the South Florida market. SMSSI begins providing protection service on a national level to well-known global retailers with stores located on 5th Avenue in Manhattan, Rodeo Drive in Beverly Hills and in the Miami Design District.

Regional offices are established across the country, most notably in Boston, Dallas, Chicago, Las Vegas, Atlanta, and Houston.

Additional branch offices are opened in Illinois and throughout Florida. A heavy emphasis on virtual services promotes growth and partnerships with best-in-class technology leaders.

Today, St. Moritz ranks as one of the Top Ten Security Services companies in the United States.

We will continue to grow both organically and through strategic acquisitions, allowing us to continue providing our clients with professional security services from coast to coast. And most importantly, we will continue to live our visionary founder’s mantra: employees are our greatest asset, service is 24/7, and clients are golden.

In Memory Of Our Founder, Phil St. Moritz

At St. Moritz Security Services, Inc., we are very proud of our history and how the company was started by our founder, Phil St. Moritz.

Phil started his life of competitive spirit and service early on as a three-sport athlete (swimming, track and cross country) at New Castle High School, and then as a member of the Phi Gamma Delta fraternity while attending Allegheny College. After earning his B.S. in Economics in 1957, Phil selflessly served as a First Lieutenant in the United States Air Force as part of the Strategic Air Command at Minot Air Force Base in North Dakota.

Upon returning to Pittsburgh, Phil immediately embarked on a lifelong entrepreneurial quest that would eventually include not only his first corporation, St. Moritz Building Services (founded in 1968), but also St. Moritz Security Services (founded in 1982), and St. Moritz Labor Services (founded in 1997). Eventually, Phil expanded his reach to include his favorite pastime in Deep Creek Lake, Maryland, with the purchase of Bill’s Marine Service in 2003. Under Phil’s guidance, all four corporations flourished both regionally and nationally, and continue to be recognized as industry leaders with over 4,000 employees across the country.

Phil was a staunch businessman known for his integrity. Few things were more important professionally to him than his word. To his thousands of employees nationwide who heard the mantra “customers are golden and service is 24/7” repeatedly, he was also a caring mentor, an eager listener, and a good-hearted, engaged boss. Phil’s employees were his family, and he took pride in how large his family had become. The longevity in his companies is a testament to Phil and his values.

Phil was not an average man and did not live an average life. He was fueled by successes and thrived on challenges. He was a natural born leader and a kind man who often helped people in ways that were never known. Phil was devoted to his businesses but always had time to live service through philanthropy. He would often say, “the three things I am most proud of are always dealing with the utmost integrity, my employees are my greatest asset, and I have a God given gift to help people.” If you met Phil even once, he made an impact on you. He would tell you things you needed to hear but didn’t want to admit. Phil was magnetic, driven, confident, and inspirational. He made an impact on so many and he will be remembered as someone who genuinely wanted to make a difference.

Are you interested in seeing what St. Moritz can do for you?
Submit your information & we will be in touch soon!